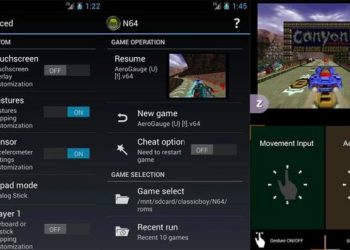 If you have been the gaming fan or the die-hard fans of classic cult games, then you must be aware of Nintendo 64. Nintendo 64 was altogether of next level which used cartridges and featured some legendary games such as Legend of Zelda: Ocarina of Time, 007 Goldeneye, Perfect Dark, Fable, and Pokemon Stadium. Moreover, Super Mario 64 sold more than 11 million copies, only talking about the Nintendo 64 one.

Though it was discontinued with the likes of more gaming consoles like PlayStation series and Xbox series, still it has an sparkling aura of its own- high and bright like the sun. If you want to relive that generation again, you can play best n64 emulators games on your Android device now.

Believe me, it will give you the same feel and taste.

There are many reasons using an emulator is the most greatest action for people who want to play the top Nintendo 64 games.

ClassicBoy is one of the best N64 emulators for Android and surely a better multi-system emulators. This N64 emulator supports advance platforms like the NES, SNK NeoGeo, most Game Boy systems up through Advance, Playstation, and Nintendo 64. Similarly, with the best n64 emulator for android there also exists some of the best n64 emulator for pc. Though each platform has its own array of new and crazy features and works fine on all of them, still it works great and strong.

This one of the best N64 emulator include features like save/load states, gesture controls, sensor support, and more. Overall, this N64 emulator works perfectly fine and is up to the notch for Android gamers.

Games are mostly stable and compatible, though some of them just won’t work whatever you do. The paid and premium version will offer you some upgrades even though the free version should be enough for the users.

ClassicBoy is available on Google Play Store for $3.99 bucks. Though it might hurt you because of the price, you can also try it for free of cost. So, you can check it before you buy it and take the decision.

If it comes to fame and popularity, there is rarely any Nintendo 64 emulator which can beat the popularity of MegaN64. This one of the best N64 emulators uses the Mupen64 open-source emulator. Further, MegaN64’s developer team has added tweaks to it. Not only this, the developer team has bring some major improvements and other things. Overall, the MegaN64 emulator gives you a crazy and fairly decent experience.

Also Read: Best Clash Royale decks which can win tournaments for you

Though there are some compatibility issues and stability issues, it won’t disturb you much and you will surely give it a thumbs up. However, it feels like they’re less common with this one than most other ones. This emulator for Android phones hasn’t given any update in a couple of years and fans think that the developer team has abandoned this.

Whenever it comes to MegaN64 emulator, you will feel it is the most used emulator for Android and for a good reason. You will have to get yourself some game ROMs and place them on your SD card. Just, place your games on the SD card within seconds to start playing.

The best thing about this one of the best N64 emulators is that it is free of cost and will charge you nothing with only some little bit of advertising. Overall, it is a thumbs up for most of the people and you should give it a try if you are looking for some free N64 emulators.

Tendo64 is one of the best N64 emulators which is a combination of all small and big features which bring a whole new level of experience.

Mupen64 is such an important emulator for some other emulators. And, many other best N64 emulators use this emulator as a base. And, now you can guess what kind of experience this emulator will give you. Bad thing is that the emulator doesn’t get its update on mobile anymore.

Mupen64Plus is one of the finest and surely one of the best N64 emulators available out there. Though it has come in the market recently and is newer, it is not easy to use. This might be your complain but still, the complicated UI will give you very much to offer.

The game brings tons of files, video profiles, and other stuff. An important thing that some games work with some profile setups while others don’t. No need of worries, most games work on this one.
However, the emulator needs some playing around to set it up which might be complicated. But, for helping purpose, the developer team has linked a good linked up guide in Google Play description of this one of the best N64 emulators.

Moreover, this Nintendo 64 emulator has various plugins, the same usual emulator features and more stuff. Unlike above ones, this emulator gets regular updates which you will love. And, that’s why we recommend you this one of the best N64 emulators.

RetroArch is one of the best N64 emulators out there. The emulator actually supports a ton of different systems. Players download different cores that work as system emulators. Coming to the difficulty level, it is very difficult to use. But once you get used to this Nintendo 64 emulator, you will start loving the n64 android emulator.

The features include auto-scan for save files, save and load states, remap controls, load cheat codes, and a lot more. Moreover, it is open-source and available for free of cost. And, there are over 80 different things this one of the best N64 emulators can do. It’s really amazing and when it starts going, you will like it. Though it will take a while to get everything working, still it is one of the best N64 emulators.

Pretendo is a nice Nintendo 64 emulator for both Android phones and tablets. Though it is not running great on many devices, still it is one of the best N64 emulators. People have seriously no problems with this emulator, it has worked literally very fine with the Android phones. But, it has some serious problems and it got crashed on the Sony device i.e Sony Xperia Z1. So, this n64 emulator for android is not for Sony users surely.

Though it is a hardware issue but a lot of users are unaware of this and curse this emulator. So, don’t go by the Google Play Store ratings- you will find them low just because of this issue only. Moreover, you will find the same host of options available on this one as the above two apps on the list. And, a thumbs down for frequent update will surely let you down but you won’t need updates- it works perfectly fine.

You can also change the video quality to resolution and from changing the on-screen buttons to the whole layout, you will be able to customize just about anything in this emulator. So, it is surely going to give you a great experience and with a white user interface, it looks amazing.

This M64 emulator is not the one you might be dreaming of- the perfect one. But, it is surely one of the best N64 emulators out there in the market as well as the best android e64 emulator to work on. This emulator has put together a nice following and is compatible with various Android devices and formats. Also, you can use cheat codes to get easier access which is really nice.

The M64 Emulator features include ROMS anywhere on your phone, punch in whatever cheats you can find online, works with Xperia Play controls and more stuff that helps you to play the best nintendo 64 games online. And, the most notable feature is you can save and load where you are in the game.

Emulator of N64 deserves a spot on the list of the best N64 emulators. Though it is kind of irritating due to ad pop ups time to time, still you will find it decent in terms of performance. It is as good and ebb flowing as Classic Boy or MegaN64.

The Emulator for N64 smartly knows how to use ROMs in compressed files, multiplayer gameplay and cheat codes to make workings easy on the emulator. Thus, setting itself as the best multiplayer n64 game.

Coming to stability and compatibility, it is a decent performer. Neither does it under perform nor goes over the board in terms of performance. Though sometimes you will encounter issues with compatibility sometimes, normally it works like butter on a knife. Overall, the android n64 emulator will depend on the games or Android device you are playing or using.

Save state and external controls although are not very common features these days, but this N64 emulator bring it all in its package. Moreover, the graphics will depend upon the Android phone or tablet you are using or operating.

How much RAM do you need for emulators?

generally the RAM has no effect on emulation speed, but still, 2GB or more is recommended RAM for emulators.

how to use n64 emulator on android?

You need to download emulators and ROMs in order to play n64 emulator on android.

There are several N64 emulators for android as well as for PC  which you can use. As some of them are well suited to use with PC and some are best suited n64 emulator for android, while we recommend 1964: as the best n64 emulator for Windows OS working as per the requirements of games while its Size is only 1.4MB. There is RetroArch which supports Android, Windows, Mac OS, Linux, and FreeBSD too and acts as a cross-platform n64 emulator. It Size is 170MB. Moreover, there is Project64 which supports Windows OS and its Size is 2.3MB. The best part if this n64 emulator is that it is written in C programming languages

Is there a good n64 emulator?

Though No emulator is perfect. Therefore, we suggest that there’s no one true “best” Nintendo 64 emulator due to their inaccuracy and unplayable nature.

how do I play n64 emulator?

In order to play n64 you need to download Project64, then Add Games to it and then you can start playing the games or your added n64 game.

what is the best Nintendo 64 for android?

Project 64 is the top performing emulators as well as the most popular Nintendo 64 emulator which is licensed under the GNU General Public License version 2 and therefore a free and open source software.

1 thought on “10 best N64 emulators for your Android phone”